The 14U Tier II team entered the last weekend of regular season play with what seemed like a long shot of winning a state championship.  There was a pretty long list of things that needed to happen for them to lay claim to the title of Colorado State Champions.  The weekend started with the team tied for second place, out of the four teams in the newly created 14U Tier II League.  They shared second place with the Colorado Springs Tigers just behind the Lady Rough Riders (LRR).  For the team to win their championship they needed to sweep their weekend of games, have the LRR lose one or two games, and have the other two teams lose more games than they won. There were a lot of things that were out of their control.

Head Coach Hannah Westbrook admits “Basically there was a small percentage for us to advance.”

The weekend kicked off with a 2-1 win over the LRR, the team’s first win against the LRR this season.  The team took the ice in the new Boulder Valley Ice Arena, and according to Coach Hannah “played one of their best, most aggressive games yet.” The team killed off all six penalties in the game, and behind a strong goalie performance from Anna Van Hercke (saving almost 40 shots in the game) were able to get the win and start the championship snowball rolling down the hill.

The second game was a 5-0 shutout win over Aspen, the fourth team in the league.  They were able to carry the momentum gain in the win over the LRR to “play a strong consistent game with great puck movement and a huge team effort”, according to Coach Hannah.  The team got point contributions from eight different players in the game.

Going in to Sunday the team still did not control their own destiny.  In addition to needing to win their own game, they needed Aspen to take down the LRR.  The team watched as Aspen was able to beat the LRR 4-2 in the game prior to the team’s game against Colorado Springs.  It was Aspen’s first win of the weekend and could not been more timely for the Select team.

Now the team controlled their own destiny.  One win for a State Championship…

According to Coach Hannah the game was “a nail biter”.  Select scored the first goal of the game at the 13:05 mark of the first period. Colorado Springs game back and tied the game early in the second at 1:32. The team weathered some penalties, and neither team was able to find the net until Team Captain Sydney Brown took control of a puck and went end-to-end to bury the game winning goal with just four minutes to go in the third.  The team held off the Tigers with great goaltending play by Lauryn MacMillan and, as they had all weekend, with great team play.

And the rest as they say, is history… 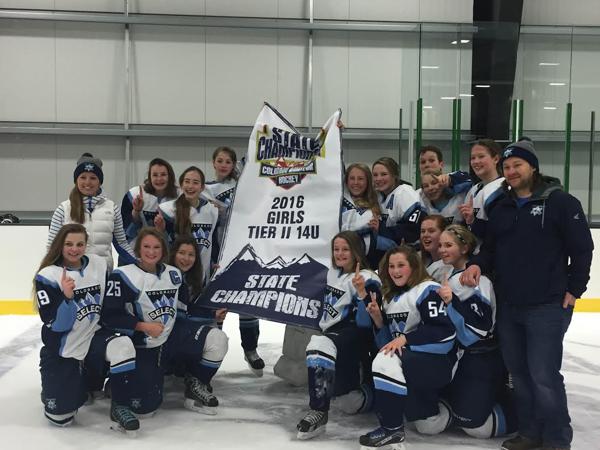